Clever-Plays is an independent game studio located in Montréal, Canada.

Clever-Plays was founded in 2013 with a mission to create high-quality games for PC and other platforms. Our games are made by gamers for gamers, and reflect our passion. 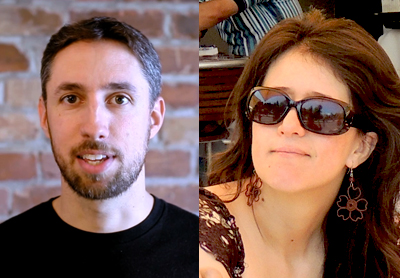 Mattieu is a professional game designer and project manager with 10+ years of experience in the games industry. His last shipped project with Clever-Plays was Leap of Fate on PC, PS4 and mobile , which he fully directed from start to finish. In his 5 years working for Ubisoft Montréal, he helped develop three games as a game designer and project manager (Shaun White Snowboarding on PSP, Shaun White Skateboarding on Wii, The Mighty Quest for Epic Loot on PC). Prior to that, he co-founded Paragon Publishings, a small table-top role-playing game company that commercialized a dozen digital products.

Prior to his life in video games, Mattieu earned a Ph.D. in biological sciences and genetics, through a split program between McGill University and the University of California in Riverside.

Angela is a business manager with 10+ years of experience in sales, marketing and management of SMEs. An integral part of Clever-Plays since its founding in 2013, Angela has been securing funding, managing budgets, and establishing relationship with key stakeholders in the industry, such as Apple, Sony, marketing and PR firms, convention organizers and governmental commerce institutions.

She holds a Master’s degree in Business from HEC Montréal.